TOP
View cart “Secret Charlotte: A Guide to the Weird, Wonderful, and Obscure” has been added to your cart.

Secret Oklahoma City: A Guide to the Weird, Wonderful, and Obscure

Oklahoma City was called “A City Born Grown” after it went from a population of a handful at Oklahoma Depot to over 10,000 on its first day. Nobody seems to mention how the streets were laid crooked and took 80 years to fix by tearing up half of downtown and that two rival city governments aimed guns at one another until the Supreme Court sorted out who was in charge. And that was only its first six months!

Secret Oklahoma City: A Guide to the Weird, Wonderful, and Obscure shares the places and stories that you won’t hear in History class, though you probably should! Learn about the Chinese Tunnels that housed hundreds of immigrant workers underground. Visit the Overholser Mansion and see if the lady of the house is still in, sixty years after her death! Gain new respect for animal heroes at the American Pigeon Museum. Find out what a giant milk bottle is doing on top of an old grocery store off 23rd. Speaking of groceries, did you know the grocery cart was invented on the south side of town? Or that the parking meter got its start in downtown Oklahoma City?

Oklahoma farm kid-turned-professor Jeff Provine has spent more than a decade learning the lesser-known tales of OKC. Come with him on a tour of the unexpected side of the City. 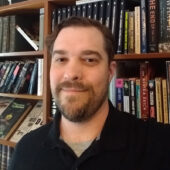