Human history in the Tampa Bay area goes back thousands of years, long before the first European visitors landed in “La Florida,” before Florida became the 27th US state, before Henry Plant and others brought railroads and hotels to the area, and before Tom Brady led the Buccaneers to a Superbowl. Oldest Tampa Bay is your invitation to explore how one of the fastest growing and changing areas in the United States evolved from “Tampa Town” that sprung up around Fort Brooke to “Cigar City” which is home to the country’s oldest family-owned premium cigar maker, to a major metropolitan area.

Visit a shipyard older than the state of Florida, take a ride on Florida’s oldest restored streetcar and have a tropical drink at one of the oldest tiki bars in the country. Catch a movie at the Tampa Bay area’s oldest drive-in theater or an exhibit at the oldest museum in St. Petersburg. Along the way you’ll meet some of the pioneering men and women that shaped the area, from the McMullen and Beall families to West Tampa developer Hugh MacFarlane, Kate Jackson who was the driving force behind the area’s first playground, John Ringling, Mary Wheeler Eaton, Madame Fortune Taylor, and a great many others.

In 90 chapters spanning over a thousand years and multiple cities including Tampa, St. Petersburg, Clearwater, Bradenton and Sarasota, author Joshua Ginsberg has endeavored to capture the unique character of the Tampa Bay area. 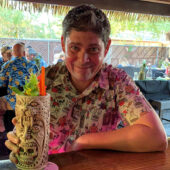