Major General John C. Raaen Jr., US Army (Ret.) was born at Fort Benning, GA, the son of an Army officer. Raised on army posts, he attended the Military Academy at West Point, and graduated in January 1943. His battalion, the Fifth Ranger Infantry Battalion, landed on Bloody Omaha early on D-Day. After the war, he served until his retirement in May 1979. He currently lives in Central Florida with his wife and family. 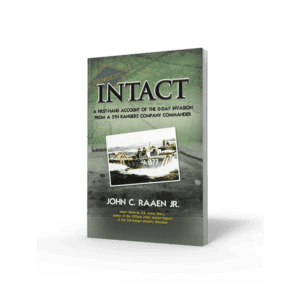 Intact: A First-Hand Account of the D-Day Invasion from a Fifth Rangers Company Commander

No videos to display.