For the past five years, Verna Gates has worked with Alabama Tourism to bring international, national and regional journalists to her beloved home state of Alabama as a contract press trip coordinator. She delights in showing people the famous, quirky and fascinating places from fine dining to hidden gems. Verna also works as a commentator for Troy Public Radio and produces and voices features and travel stories. In 2009, she was awarded a lifetime achievement award from the National Federation of Presswomen, the Communicator of Achievement Award. She has won numerous national awards for her articles. Her career began as one of the original 50 employees of CNN who worked to launch the network and has also reported for TIME Magazine and Reuters International News Service. 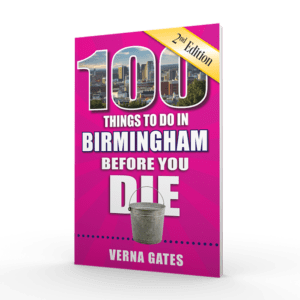 100 Things to Do in Birmingham Before You Die, Second Edition

100 things to do in Birmingham highlighted in new book – AL.com

No videos at this time.

No events at this time.